As explained earlier, the irregular verb الفِعْلُ المُعْتَل in Arabic is the verb that includes a weak letter حَرْفُ عِلَّة (i.e. ا ، و ، ي). It is considered irregular because its root changes while appending attached subject pronouns to it. This change can be leaving a weak letter out or changing it to another weak letter. 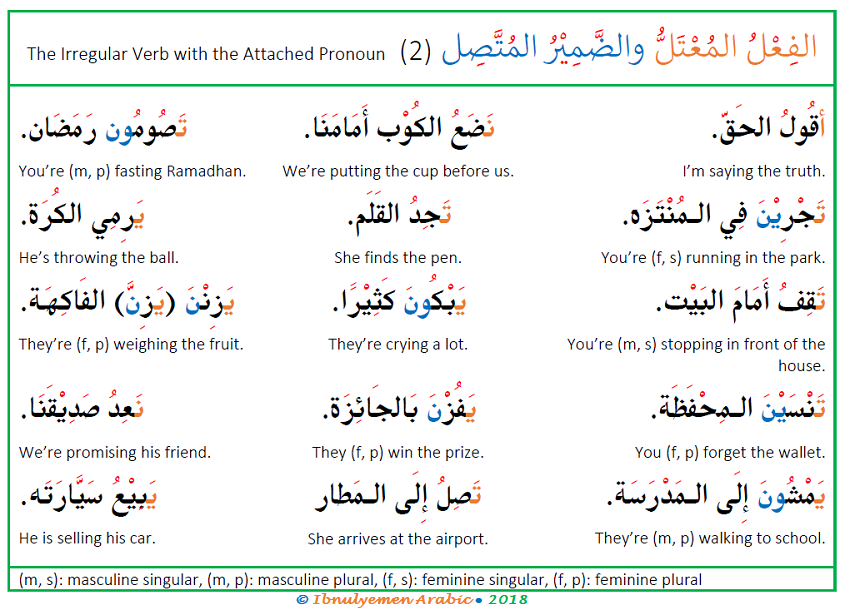 In this lesson, we will focus on the imperfective form الفِعْلُ المُضارِع of the irregular verb, particularly how the root of the verb changes when we add pronoun suffixes and prefixes to it? The root of the irregular verbs can include more than one weak letter; however, our focus here is on the verbs that contain only one, such as وَجَدَ ، وصَلَ ، قَالَ ، صَامَ ، جَرَى ، مَشَى. For further practice and better vocabulary retention, let’s add attached subject pronouns to the verbs you learned in the previous lesson by changing their forms into the imperfective مُضَارِع. Looking at the verbs in the table above, you can see that most of the roots undergo some change. What triggers this change? Let’s find out.
There are no comments for this article at this moment. Add new comment .