Arabic is a right-to-left cursive language. This short e-book “Ibnulyemen Arabic Alphabet and Cursive Writing” typographically shows how the Arabic letters are connected to to form words. There are twenty-eight letters in Arabic. Each letter has four shapes: at the beginning of the word, in the middle of the word, at the end of the word, and in isolation. This, as a result, seems like a burden for most learners of Arabic as a foreign language. Therefore, many of these learners resort to using transliteration which is disadvantageous in the long run, especially since there isn’t a standardized system of transliteration and / or phonetic writing.

At first glance, it may seem like a burden and time-consuming. Quite the contrary, it is fun and artistic even if you, at the outset, don’t know the meaning of the words you are writing. More importantly, learning how to connect letters to form words will facilitate your learning and speed the process of acquiring Arabic. In addition, your articulation will become substantially intelligible, especially if this is accompanied by learning how to assign diacritical marks (i.e. short vowels) correctly. What’s more, Arabic is a phonetic language, and hence you will encounter no difficulty as far as spelling is concerned. 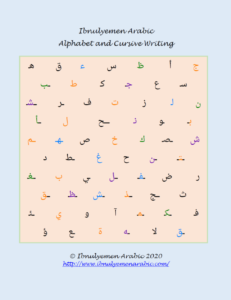